Michelangelo and His ‘David’

To all my unknown 知音人:

The first article published here is something about the ‘David’ and me — David.

Any response are strongly welcome.

Michelangelo and His ‘David’
Florence of Republic was established in 1501. The Medici Family, which ruled the city for over a half century, was repelled. The new regime decided to make a symbol of liberty for memorization. Michelangelo, therefore, was commissioned to create the sculpture David, which regarded as the symbol of ‘Strength’ and ‘Wrath’

Michelangelo broke away from the traditional way of representing David. He did not present us the winner with the giant’s head at his feet and the powerful sword in his hand, or try to depict us a nearly womanlike youth with a hat wearing posture. Instead, Michelangelo placed his ‘David’ in a most perfect and affectionate poise in which the two important virtues of the ancient patron city of , ‘Strength and ‘Wrath’, were embodied. These lofty virtues, coincidently, were the essential elements that the newly formed political community required. 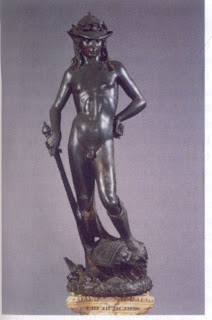 In this article, I will like to examine the main features of the sculpture David as well as some interesting
backgrounds of its formation. By examining the underlying ideas and symbols of the sculpture, at the same
time, I will try to demonstrate how Michelangelo gives rebirth to the ‘Classical humanism’, exploring the
concept of the ‘Renaissance individualism’ that influences the creative trends of the artists later.

The Origin of ‘David’

The most important and memorable event for the Florentines in 1501 was not only the formation of the new Government, the Republic of Florence, but also one of the greatest statues that they can be really proud of, David, was in the process of being sculpted. Michelangelo, a genius artist acknowledged already as the foremost sculptor of his day, was given a commission by the new Republican Government to chisel a statue from an abandoned large block of marble left in the Cathedral in . In 1464, Agostino di Duccio had been commissioned to execute the statue from the same block, but he did nothing, and nor did his follower, Antonio Rossellino, in 1476. The task, therefore, seemed to be obstinate and problematical. It was thought that the block was practically worthless and that nothing worthwhile could come of it. However, even a stone could become a piece of gold in the hands of a genius. Michelangelo decided to carve a statue, David, symbolizing that just as David, the king of in the ancient kingdom, had protected his people with unrelenting strength and governed them with the wrath of justice, so would whoever was entrusted with ruling [1].

The Political Connotation of the Statue

The decision to carve the statue, David, was not a mere coincidence making use of a large block of discarded marble, but represented a desire and yearning of the Florentines. From the previous century onward, David the shepherd boy who became king of by defeating the tyrant, was a common motif in . He was a warrior as well as a ruler, who united the of and re-captured . More importantly for the Christianity of Florentines, David not only seemed to prefigure Christ, symbol of salvation, but according to the Book of Matthew, he was also Christ’s direct ancestor[2]. Thus, it was not surprising that the Florentines could accept a young, justice figure like King David as their traditional symbol of the city-state. Furthermore, the bravry, courage and righteousness of warrior David portrayed by Donatello and Verrocchio in their sculptures had successfully rooted in every mind of the Florentine. As such, the newly established Republican Government really required ‘David’ to represent the triumph of the People’s Republic over the tyrant. The defeat of the fierce giant Goliath by King David symbolized the successful revolution of the common people against the Medici family of the stronger side, and also her monarchic rule of the city for over a half century[3].

Doubtless Michelangelo’s David breaks away from the traditional way of representing King David. He does not present us with the young winner with the giant’s head at his feet and holding the powerful sword in his hand, somewhat like the style of Verrocchio, nor a tenderly feminine-liked figure of not more than two meters height, wearing a hat and standing sensuously which is in the style of Donatello, after the battle with Goliath. Michelangelo’s David is a mature young man, more like a statue of Goliath than the ruddy shepherd boy with a sling. He portrays David in the phase immediately preceding the battle. Perhaps, this is the moment that his people are hesitating and getting frightened, while giant Goliath is jeering and mocking them. The strength of David is felt not only in his muscular arms and mature body, but also from every nuance of flesh and detailed facial expression. Without depicting any vigorous and energetic action, the sculptor skillfully conveys the impression of the unrelenting strength, or even the wrath of justice, through the sparkling eyes, the frowned forehead, the closed lips, and the tightened eyebrows of David to viewers. The determination and courage of David are easily felt. Michelangelo’s ‘David’ could overcome any difficulties laid ahead without any hesitation in order to protect his people and maintain justice in the country[4], so as could the Republican Government.
Nevertheless, the poise of the statue is not entirely new. Using classical male nude as a medium of expression is seen in the work of Donatello and Verrocchio. However, the style that Michelangelo revealed is not only the revival of classical humanism and realism, but also its extension. The portrait of David is remarkable for his detailed naturalism, delicacy, elegance and complexity. In such a way Michelangelo developed a formidable sculptural technique that David rivaled the work some ancient sculptors such as Praxiteles, or to some extent, surpassed them[5]. David’s perfect poise is full of latent energy and strength, with huge limbs and a watchful expression on his sharply delineated features. One massive hand dangles loosely against his right thigh and the other is raised to hold the sling, so that the long line of the open, bent left hand silhouette contrasts with the closed, straight forms on the right. According to the art historian, J. Wilde, the Medieval concept emphasized the right side of the human body as the closed, active, defended, and God-protected side; while the open, vulnerable, passive and unprotected side was on the left[6]. The turn of David’s head
directs the viewer to look in the direction, the left side, from which attack may come. His left hand is ready to fight against any enemy with the sling and even his body, his left foot, turns and steps a bit leftward opposing the open, relaxing right side. The underlying idea of Michelangelo’s David is clear. This is the David of watchfulness, faith and hope. He represents the essence of all civic virtues, the courage, fortitude, faith and far more important, the ‘Strength’ and the ‘Wrath of justice’ that came from these virtues. All these qualities possessed were also the essential elements required for fortifying and unifying the newly established Republican Government and the people of [7].

Without letting anyone saw the work in progress, Michelangelo spent nearly two and a half years on the task. It is a statue of seventeen feet high and hence, people often like to call it ‘Giant’[8]. When David came to in 1504, he indubitably brought tremendous impact to the society of Florentines, as well as the committee of the highest ranking citizens and artists. Where should David be placed, in the main square

of the town or in front of the Palazzo Vecchio, or the Town Hall? Although the dispute was not easily settled,

it gave no harm to the loftiness and respectability of David. The two most important virtues, passionate

indispensable elements of the Florentines and their Republican Government in the past, but also, to some

extent, of all the people, including every individual, every nation and even every Government in the present