Historians always seek the first. If they examine a style, they try to locate the first artwork that reflects such style, or the first artist to create such style. Quite interestingly, after the  so-called the ‘first’ is found, not lasting for a long time, another  the ‘first’ appears. For the now-famous minimal style which has swept through many of the 20th century musical works, we always speak of Terry Rily’s “In C” or Philip Glass’s many minimal pieces. But could you think of Richard Wagner’s music dramas?
The following discussion may lead you to a new terrain of understanding of the so-called musical minimalism. Be it a style of 20th century music only, or through broadening its definition, that we can also find some extraordinary works which may also be called minimal music before the 20th century.


Wagner’s four minutes length prelude Das Rheingold unquestioningly shows three significant Romantic traits: 1. sublime orchestral sonority; 2. kaleidoscopic timbres; 3. prolonged melodic line. The overall mood portrayed in this grand passage is extensively dramatic, yet profoundly poetic and sensationally touching, rather than only elegantly classical under the aegis of well-proportional and symmetrical. Apart from the apparent Romantic appearances, however, this inspiring passage is not without having other novel features that invite further scrutiny.

Although the entire passage lasts almost four minutes, the musical motion merely depends on the projection of one single element, the Eb major tonic triad. The thematic melody, the sustaining pedal and the orchestral accompaniment are all derived from this lonely Eb major chord, continuously repeated again and again throughout the prelude section until the tenor vocal enters. Doubtless the monothematic setting here is extremely minimal. This unreasonable economical use of materials probably reminds us of Maurice Ravel’s Bolero (1928), which could be regarded as one of the precursors of the Postmodern Minimalism in the years sixty. Boleroonly consists of a single Spanish dance theme and a snare drum rhythmic ostinato unfolding throughout the whole piece. Similarly, Das Rheingold also reflects such conspicuous feature.
Another significance that is worth considering is the restless subtle changes within each repetition. By adding different instruments to the texture and changing the accompanimental pattern in the inner parts, the musical tension is built up gradually. These nuances of change not only enhance manifold timbres so as to avoid monotonous, but also thicken the orchestral sonority step by step, providing a gradual increase of dynamic from the soft to the climatic loud tutti near the ending. The effect is that musical tension is held for the entire passage. As a result, neither a single repetition of the melodic nor a harmonic pattern generates the same sonic sound.   Such small-scale continuous changes within each repeated pattern is very similar to the art painting work, Coca Cola, drawn by Andy Warhol in minimal style in 1962. In Coca Cola, a matrix of numerous coca cola bottles of the same size is orderly displayed on the canvas, but in fact no single bottle is exactly identical. Doubtless the subtle shift within similarity is one of the most salient attributes of Minimal Arts. Das Rheingold, in this regard, can be understood as an embryonic minimal work. 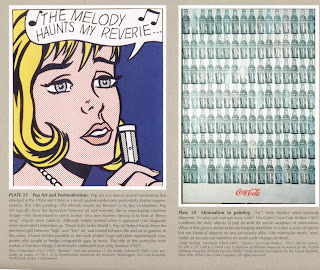 In short, Wagner’s prophetic setting comprises much novelty and innovation, despite its apparent Romantic outlook. The single Eb tonic triad successfully maintains the entire musical motion and tension. In order to retain audience’s interest within a monothematic background, the orchestration, timbre, dynamic, harmonic pattern and texture are altered incessantly. This restless small-scale change is the key factor for the gradual growth of musical tension, building up a more complex texture and bombarding sonority until the climatic conclusion. Das Rheingold, therefore, can be regarded as an extraordinary example of hybridization of Romanticism and somewhat nascent Minimalism.