Prelude: Continue the last writing on the topic of “borrowing” in the commerical field. This time I will look at a series of pictures that SCMP call it as Keanu Reeves’ Matrix Photos.

Readers can look at the pictures first before I start discussing the techniques and meanings behind these images. Please enjoy appreciating these pictures. 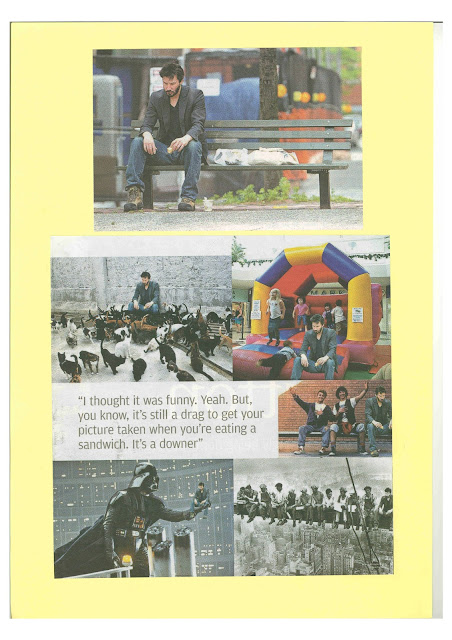 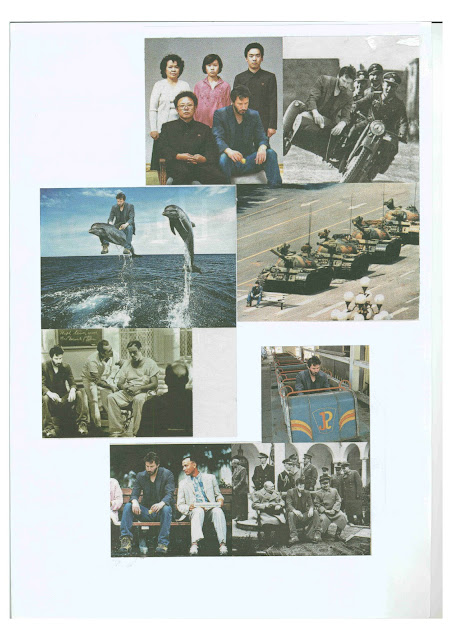 The first photo (at the very top), which shows a ragged man of a weary face, dressing a ragged coat, with a piece of bread holding in his tiny hand,  is the primary image. The newsapaper calls him Keanu Reeves. He just looks like an outsider, perhaps an alien coming from other planets, without belonging to any today’s society. He is lonely, sitting on the border of  this so-called civilized, high-tech, prosperious and wealthy world. He is eating, but without tasting. He is meditating, but without thinking. He is “living”, but without “life”. Everything surrounds him is cood, hard, and strange. In fact, there are many this kind of outsider concealed in every corner of our world. They are minority of the society, who are poor,  hopeless, as well as being discriminated and neglected by the majority. How ridiculous the photo is when you find that Keanu’s image is sticked onto another images of a photo, somewhat like a pastiche.

Beside Keanus’ original photo, the rest are designed in the style of collage, consisting of Keanu’s primary image and other images, which may be taken from a news’ photo, adverstiment or movie poster.  Similar to Wyneer’s poster, the collage of Keanus’ “Matrix photos” is also made from the technique of  “borrowing”. However, unlike Wynners’ poster which only alludes to a style, this series of photo quotes directly the image of Keanus from its photo. So we usually call this kind of borrowing as  “quotation”, instead of “allusion”.  Since the outcome style of this kind of collage photo is not only funny but also a mode of black humour, we call it as “parodic quotation”. True, no readers will deny that Keanus’ matrix photos can bring along a picture of laughter and tear, inviting readers to think, to meditate, like 鄭君綿 ‘s parodic song in the years sixty of Hong Kong.  For example, can we sense the meaning of the picture of the family portrait of Kim Ching Yat, the Chairman of North Korea?  When we see Keanus, a ragged man with ragged coat,  sitting beside Chairman Kim, how do we feel?

North Korea has already been a country notorious for its poverty, starvation, undeveloped, devastating human rights and freedom for many years. Keanus’ half-thinking half-upsetting posture, sad face, ragged appearance, just reminds the readers of his North-Koreanean ordinary, tiny, neglected, and hopless  image, which is contrasted with the pride, authority, power and top image of Chairman Kim and his family. Now we may see how collage style can possess high potential of expressivity in an artwork.  Readers can uncover more interesting meaning laid behind all other collage pictures in this Keanus’ Matrix series. How about the picture that depicits our small Keanus, who is just sitting on the gigantic hand of the giant-like “Black Knight” of Star War, how much do you understand of it?

In short, when an image from a picture is put in a collage with another image in a picture in order to create a new picture, there always comes up with a question: which one quotes another one? In the above collage pictures, it is hardly for us to discern which photo is the quoted one or which one quotes others. In fact, determining which image is the subject and which is the object is not that important. The far more important is to choose either one to start a reader’s interpretation.  From the above brief discussion, it is clear that collage is a very important technique for an artwork to elicit an aura of black-humour. Indeed collage style is easily found in many contemporary artworks, including musical works. Readers should not forget that when objects of different styles, different times, different natures, albeit just a fragment, are collided (not mixing up) to each other in an artwork, there often a new meaning is bestowed to these objects. Next time, I will write more on the use of collage of quotation in contemporary music, in order to acquire more understanding of the so-called postmodern musical style.