Whether the borrowed tune and the last fading sound is an experience of mourning for the nostalgic loss, or acclaim of the past, a preserved value of the childhood or any other kind is no longer the matter.  What is most important is that the series of quotations juxtaposed in this song is a perception of the sonic world which denies interconnectedness, continuity, but which confers on each moment the character of a mystery, leaving a space for us to search what happened and what was there.  The Quotations in the form of song, therefore, is as evocative as the photo images in a private album.  They can always be capable of linking our distant past with that of the present, bringing us a sense of emotional responses in that particular moment.

If the different quotations in The Things My Father Loved are like the “photos” collected in an private sonic album, Ives’ another piece, Country Band March, which comprises a hotchpotch of borrowed tunes of March, Folk and Pop, will somewhat resembles a “photo” or “painting” which contains many other sonic photos or paintings.  This comes to the discussion of the second metaphor of quotation.
Quotation: “Paintings” inside a Sonic Painting 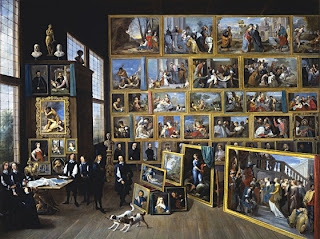 Numbers of paintings inside a painting can show Archduke Leopold Wilhelm’s sights: sights of what he may possess and want to possess.  This painting of private picture gallery could be a symbol of his wealth, fame, taste, and contribution.  But these quotes might have more values that they actually acquired.  When we appreciate such painting, we also appreciate the value of the entire collection bestowed upon it.  It is not necessary for a viewer to identify all paintings, but more important is the emotional responses aroused from such perceptive experiences.
Similarly, all quotations collected in Ives’ private sonic album, the piece Country Band March, are “things,” and thus possess values.  Country Band March, in fact, is a vivid sonic picture of an amateur band playing with beats dropped and added, parts of step, miscues, mistranspositions, spontaneous solos and general high spirits.  Interestingly, Wiley Hitchcock calls it “an American equivalent of Mozart’s Musical Joke.”[1]  The borrowed fragments consist of various styles of tune: , The Girl Left Behind Me, The Battle Cry of Freedom, Arkansas Traveler, Semper Fideles March, Yankee Doodle, British Grenadiers and at least two popular songs, Violets and My Old Kentucky Home.[2]  Some of the quotes are patriotic and celebrative, while others are nostalgic, folk and popular.  To Ives, capturing all sonic elements of the past in this piece could be a way of preserving the most valued “things.”  These sonic “things” belong to the past, for example, a sense of remembrance and love, or nostalgia of a beloved person, and place, or an experience of past life.  By appearing in form of quotations, these “past” things become present, become values.  When listeners are invited to search what were there inside this collection of sonic photos, what values could we find?