Prelude: A student sent me the poster and asked me about the technique of the propaganda laid behind Wynners’ concert poster. By chance I read a series of another interesting pictures in SCMP. The technique behind this series of pictures are very similar to that of Wynners’.  Hence, I start my writing……..

Let us look at the poster of Wynners’ concert progaganda first. 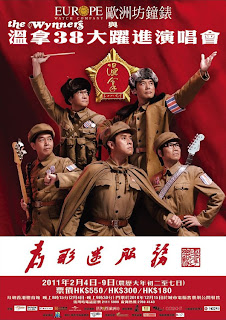 What comes up in your mind as you watch such a poster? It is not that difficult for the old Hong Kong people to recall the ridiculous, however poignant and tragic, experience of the ten years Cultural Revolution in China. The dresses of Wynners are an evocative source, even more shocking than the red printed statements: “To Serve the Fans” and “The Great Leap Forward Concert”.  Indeed they wear in the style of Red Army Guard uniform., which is widely known as a symbol of the Cultural Revolution. Although the Red Army Guard comprised of people of different ages, coming from different social classes and backgrounds, one common feature they beared was their almost blindly upholding of every treaty of Chariman Mao’s teachings. Under the propelling force rendered by the Red Army Guard, the whole country was immersed in a fervent, albeit unreasonable, politicial movement that upheld the slogan “To Serve the People”.  Tragedy then occured. Industry collapsed, production collapsed, farming collapse, economy collapsed, education collapsed, cultures collapsed,  arts collapsed, the society collapsed, then the whole system collapsed, and finally, all the people collaped too. They collapsed because they were served, — served with starvation, poverty, unedcuated, materials scarcity, and perhaps, also served with innumerous nothingness and emptiness. Even though some older generations have not been directly suffered  from this politiical and socio-cultural disaster, they hardly forget the devastating effects that the “evolution” has brought forth. They suffered from its impacts in the years of sixty when Hong Kong was in the time of riot.  However, for the younger generation, the shockings and impacts of Cultural Revolution are lesser. Perhaps, young people may know something about the terrifying tradegy from the mouths of their grand parents, but they did not really feel such kind of pains. This is because nowadays youngsters did not study history, think deeply of it, learn seriously from it. Maybe we have to say “thanks” to the present government because of rendering such a successful education policy that tends to marginalize the Chinese history of this notorious period of time, though, even the officials are not refused to accept the fact that cultural revolution is a very mistake.

The style of Wynners’ poster, therefore, dispersing an aura of black-humour, consisting of somewhat laughter and tears.  Laugter comes from the joyful occasion of a concert, of the funny look and of the postures of Wynners. However, tears do not disappear if your mind is conjured up with the abundant meanings behind such images. No question that the design of Wynners’ poster involves the technique called “stylistic allusion”, a kind of borrowing technique. Since the aethetic meaning the poster brought with is a mode of black-humour. We can also specify such stylistic allusion to be called parodic allusion. When artists allude to a style for satirical expression, we call it as parodic allusion. Instead of alluding to a pre-existing style, artists borrow, or quotes, materials from a pre-existing work, incorporating into their own works, we term it as parodic quotation. Parody, hence, is an important expressive meaning of Wynners’ poster. When speaking of the postmodern style in his book Music Since 1945, Schwartz Godfrey also points out that pardoy is one of the ten particular features found commonly in postmodern artworks, especially in musical works.  However, readers have to be reminded that 20th century parody in music is different from that of Renaissance. Renaissance parodic mass is a polyphonic musical work consisting of a secular theme set as cantus firmus in the tenor voice, whereas, the postmodern parody consists of stylistic allusion borrowed from the other works in order to express a form of humour. For example, a famous Cantonese parodic song with quoted melody is sung by 鄭君綿 的 “帝女花”。The first phrase is sung as : 落街冇錢買麵包，借錢又怕老婆鬧。This parody is expressed in a form of satire or black-humour. When this song was first published, it was a harsh time for Hong Kong people. The economy of the late 50s of Hong Kong is still developing. Poverty was a common soical problem. Great majority of the laymen were struggling for their life. This is why the song became so popular and were widely spread out when it was first released by 鄭君綿 .